What do Emilio Botin (Spanish banker), James Gandolfini (american actor) and my grandpa (argentine journalist) had in common? None should have died when they did….

They all suffered “heart attacks”. No details have been provided on Mr. Botin’s (79) death but according to a media source “it was totally unexpected” and “…it occurred a few hours before he would present a painting by Velázquez that he helped restore…”. Mr Gandolfini (51), well known for his role in the Soprano’s, was on vacation in Rome and planning to attend the closing of the Taormina Film festival in Sicily when his 13 year old son found him unconscious at their hotel’s bathroom. Resuscitation efforts at a hospital were unsuccessful. My grandfather (68) died of acute pulmonary oedema (i.e. acute heart failure) the day after he was planning to join a sports club…

Despite medical supervision (a cardiologist was “seeing” my grandfather), it is an epidemiologic fact common to most people above 40 years of age to have at least an untreated or undertreated vascular risk factor. Among the most common modifiable risk factors are inappropriate nutrition with or without excess weight, a sedentary life, current or recent smoking, high blood pressure (undiagnosed in 1 out of 3 people and uncontrolled in 80% of diagnosed patients in developed countries), abnormal lipid levels or diabetes. Also, Botín, Gandolfini and my grandfather shared a load of un-modifiable risk factors such as male sex, age and, potentially, a spectrum of unfavorable genetic traits. All these factors alter the normal arterial wall structure generating plaques that progressively narrow the vessel’s lumen leading to a decrease in blood flow to the heart, brain and other organs.

The vascular problem is complex and dynamic. It is definitely not just a matter of clogged pipes. In fact, 80% of myocardial infarctions (MI’s) -with a high mortality rate- occur due to arteries that are not previously “stenotic” (i.e. narrowed). These patients will not be detected with a coronary “stress” test which only identifies arteries that have advanced narrowing and thus cannot supply enough blood to the heart muscle. Only 20% of MI’s occur in patients with previously narrowed arteries and these are the ones that can be detected by warning symptoms or a positive stress test. The concern, then, is that the vast majority of people have “plaques” covering the arterial wall (as dirt may accumulate in the walls of a plumbing system) which do not decrease the vessel’s diameter and are thus difficult to detect with conventional studies. The danger is that the so called “plaque accident” can unexpectedly occur leading to a sudden plaque disruption that generates a clogging cascade ending within minutes with a blocked artery… and an infarcted or dead person. A similar mechanism underlies many strokes. We have all heard people saying: “… how could this happen?… he/she was so healthy….”. In the case of James Gandolfini, the New York Times quoted that, after receiving results of the autopsy, a family member stated that he “…died… of natural causes”. Wrong! These people are sick and the essential -the status of their arteries- was invisible to the eye…

What Botín, Gandolfini and my grandpa did not know is that almost 80% of vascular events occur in people with few risk factors. This is the reason why most people feel that a heart attack or stroke is something that will happen “to others”. Yet, some people get health check-ups with the hope that if “approved” they get a few years’ survival guaranteed. Disappointingly, a Danish study on 180.000 people published recently in the British Medical Journal showed that conventional health check-ups (including a chest Xray, EKG, ultrasounds and blood tests among others) did not decrease total mortality or death secondary to cardiovascular disease or cancer, the very reasons for promoting and performing these evaluations (pap smear, mammogram, colonoscopy and prostate exams were excluded). So, what are we missing?

Could an eye doctor give you the right glass prescription without examining your eyes? The exact same rationale applies to disease of the arteries irrespective of whether they are in the heart, brain, legs or kidneys. Different methods can reliably evaluate arteries but most are expensive and some are invasive such as catheterization and others, like multi slice CT, use high doses of radiation precluding the repeated testing needed for disease follow-up. Ultrasound is fast, reliable, non invasive and affordable. There are ultrasound tests available that allow to objectively measure the atherosclerosis load in the vessel’s wall. Atherosclerotic plaque quantification was originally developed by David Spence in the 90’s and further studied by Valentin Fuster and others more recently. A quantification of arterial “plaque” burden (expressed in square or cubic millimeters depending on the technique) allows to accurately measuring the individual’s risk of having a vascular event. Knowing a person’s vascular risk factor profile (smoker, excess weight, hypertensive, etc) does not provide accurate data on that individual person’s risk of suffering a heart attack, stroke or other vascular event. In concordance with this notion, the latest lipid therapy guidelines recommend treatment according to the person’s vascular risk and not according to a specific cholesterol level. It is impossible to accurately define the best medical treatment based only on a person’s risk factor profile (or using “risk scores” which are derived from risk factor data) without measuring the load of atherosclerosis that affects the arteries. Vascular prevention should be based on a tailor made treatment. Or, again, could the eye doctor give you the right glass prescription just knowing you can’t see well (i.e. that you have vascular risk factors) without examining your eyes (i.e. your arteries)?

From Galileo Galilei to the software metrics guru Tom de Marco, many have stressed that one can only control what is measured. And everything is measurable. We should not only be measuring the conventional risk factors such as blood pressure, cholesterol, glucose, exercise and calories, but also the amount of atherosclerosis in the arteries. Only then we will be able to adjust the treatment of vascular risk factors “individually” according to all findings. The World Health Organization and different research authorities have shown that cardiovascular deaths could decrease by 80% if what we know about vascular disease was applied effectively. Botín, Gandolfini and my grandfather, no matter their wealth, social status or popularity were probably not receiving the medications and other measures (exercise, nutrition) that could have prevented their deadly vascular event. It is also unlikely that they had their “atherosclerosis” burden measured to adjust treatment according to their individual atherosclerosis load. There are millions more like them that every year have fatal MI’s and strokes. Of the approximately 150,000 people that die every day worldwide, almost one third dies of vascular related disease. Most of these deaths are preventable. It is due time to declare “tolerance zero” to unexpected vascular death.

Posted by Carmen Lahiff-Jenkins at February 05, 2015 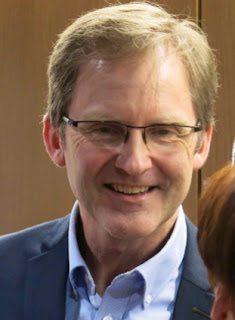