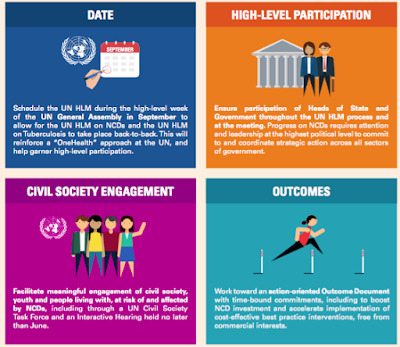 On March 1, the UN Secretary General released a report on the progress of the prevention and control of Non- Communicable Diseases. It’s a vital document and a sobering read for those working to prevent stroke and other NCDs. You don’t need to read too hard between the lines to perceive the frustration and mounting impatience over lack of substantive progress in the seven years that have passed since governments first committed to address one of the ‘major challenges for development in the twenty-first century’.

The report highlights that 138 governments have demonstrated ‘very poor or no progress towards their time bound commitments’, the Secretary General notes noting that ‘the world has yet to fulfil its promise of implementing measures to risk the risk of dying prematurely from non-communicable diseases.’

The disproportionate burden experienced by low income countries is highlighted with key reasons for the poor and patchy progress identified as economic and trade promotion interests (often backed by governments). A significant challenge has been the active interference in policy by global industrial actors, working to undermine taxation and marketing restrictions on tobacco, alcohol and sugar. Taxation of harmful products has been put forward as a public health ‘best buy’ for governments, as it not only helps to reduce demand but also generates funds that can be used to prevent and address NCDs.

A lack of financial and technical support has also put a hard brake on progress. According to the report ‘despite the modest financing requirements and the cost-effectiveness of interventions’ domestic and international development funding is still ‘grossly insufficient in developing countries’.

The Secretary General concludes by calling for the development of an ‘innovative way of finding new development pathways that effectively address impediments and at the same time encourage creativity and innovation’.

The report is intended to form a backdrop to consultations in advance of a UN High Level Meeting on NCDs in New York later this year. The NCD Alliance, of which WSO is a member, wants to make sure that timing, participation and civil-society engagement in the high level meeting is optimized to ensure government commitment at the highest level. The WSO supports their call for the meeting to be

-       Timed to coincide with the UN General Assembly and back to back with the UN High Level Meeting on Tuberculosis to reinforce a coordinated ‘OneHealth’ approach:


The World Stroke Organization will be working with the NCD Alliance, and our other partners to ensure that the voices of the stroke community are heard in civil society consultations and in negotiations.