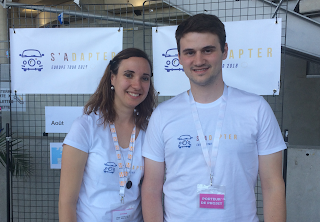 Louis never lost courage or hope. He has been fighting for over three years, and continues to do so today. Little by little, he realised that dialogue is the essence of mankind and that communication defines a human being. After many years of struggle, Louis has put his life back together. Today he can communicate very well indeed, and now he wants to communicate with others across Europe; about strokes, disability, and how they are managed in Europe.

When tragedy struck, Elise had not finished her studies in medicine, but the stroke didn’t stop her – it simply set her back. She continues her rehabilitation in order to regain more of the motor functions that are essential for her (regaining movement in her left arm). 2019 will be a crucial year for Elise, because two years after the stroke that knocked her life off course – she intends to finish her medical studies.

Both Elise and Louis have strength; the strength to fight for what they want most to be #UpAgainAfterStroke; for Louis to regain his speech and for Elise to regain the use of her left arm.

And together they have a plan. For about a year they have been working on a project that meets their shared goals for discovery and adventure. But it’s not just fun and games. They want to share the story of what happened to them, talk about what opportunities for prevention exist, how their debilitating effects of stroke are treated, as well as about the pressing need for rehabilitation using all the research currently available to neuroscience.

The couple want to travel across Europe to meet aphasia and stroke associations, to share their stories and raise awareness. Their vehicle will also be their bedroom. What better than a van? But an adapted one, because Louis uses his left arm and Elise uses her right. They plan to document their journey through a video and book, and the journey will culminate in a conference in France, where they’ll make recommendations for improvements in stroke treatment and care across Europe.

Through their journey they also aim to challenge perceptions about disabilities and about life after stroke.

If you would like to follow Louis and Elise’s incredible project and get involved in supporting their #UpAgainAfterStroke journey please visit www.sadapter.eu or https://www.facebook.com/sadapterEU/