My reason for preventing stroke? Seeing how stroke turned my father and our family’s life upside down 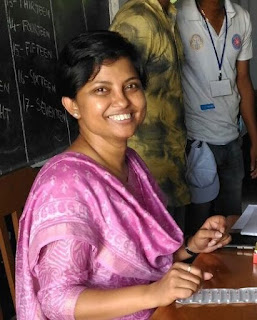 Before the stroke did you have any idea that your father was at risk of stroke?
Partly. Because we did know that my father was suffering from high blood pressure.

When and how did you realise that your father was having a stroke?
On that very day, my father felt weakness in his left arm and with passing time he was having difficulty talking. Later,when he was consulted with a local physician he suggested a CT scan and it revealed that my father had suffered an ischaemic stroke.


Can you tell us a little about life before you father's stroke?
My father was the single earning member of our family. My mother was a house wife and me and my brother was busy with our studies then. When my father had his first stroke it was not so very severe. We consulted a stroke expert after getting the CT scan report and my father was under his treatment. As he was recovering from the first attack of stroke, however, he suffered from a recurrent stroke. This was 5 months after the first one and this time it was a severe one. He lost his cognitive power and his left side was paralysed. He was then admitted to a government hospital under the care of a stroke expert. At first acute treatment was given and then rehabilitation started. He was released from the hospital after 3 weeks. But now my father’s whole life as well as that of all of our family members was changed. My father was very active and busy with his office. My mother handled all the household work. But now my father had to depend on someone for his daily life and my mother had to play the role of caregiver while simultaneously taking care of the household. Life became hectic for us all, both economically and physically.

How has life changed since your father’s stroke?
Our life was changed after my father suffered from stroke. As he was the sole earning member and worked in private sector, we had to think about the financial part of our family. Moreover, my mother’s health became an issue with the increasing pressures on her and her workload got increased. She had to manage the household works and my father’s care also. Me and my brother tried to help her but we also had our own studies at that time.

What steps do you take now to prevent stroke? How are you working to reduce your specific risks?
We have become more aware about the risk factors and burden of stroke. I personally have become associated with the Stroke Foundation of Bengal and take part in their different programmes to make people aware about stroke. I personally tell my friends, relatives and neighbours about the risks of stroke and make them aware about the signs and symptoms so that they can easily identify stroke and take proper care of the individual who suffers from stroke.

What would you say to other people to make them take stroke prevention seriously?
Be aware about the sign and symptoms of stroke. I would tell them about FAST:Face drooping; Arm weakness in any one side or both; Speech problem in talking or understanding; and Time is brain, not to waste time and immediately take the patient to nearby hospital or stroke care centres.

What is your reason for preventing strokes?
I know personally how stroke changes one’s life, so I try to make people aware of the risk factors, especially high blood pressure, the single most important cause of stroke. By knowing your risks, following the precautions and modifying life style one can easily prevent stroke.